Comet Neowise is now a evening comet. Now you can get your entire family to see it because nobody apart from you wanted to get up early at 3 am!

The comet is visible at dusk, after sundown from 8:30 ish looking North by North-West. So all you need is unobstructed view looking North, clear skies and low light pollution.

If you live in Delhi, good luck with that.

skyhound.com published a nice star chart that shows the daily progression of Comet Neowise through the night sky. The chart shows the comet’s path from July 2nd 2020 to July 31st 2020

To watch it, wake up around 4 am look east/north-east just before daybreak, the comet is currently just outside the constellation Auriga. Its easily visible to the naked eye at an outstanding magnitude of 3.

But you must hurry, because its hurling towards the sun at a very high speed and may not be visible in a few days when its completely overwhelmed by the sun

If you’ve read a lot of material out there on comets or seen some lovely images of Comet Lovejoy C2014/Q2 lately, you’ve noticed beautiful green colors in most of these images. Most astronomers and astronomer magazines ( NASA included ) attribute it to emissions from a chemical cyanogen. Cyanogen according to astronomers is radical containing one carbon and one Nitrogen atom . In reality it is NC-CN. The C & N molecules linked by triple bonds. What is more funny is that the green does not come from cyanogen. Here is a picture of what the visible spectrum of Comey Lovejoy looks like. Thanks to Vikrant Agnihotri of Cepheids Astronomy Group for this 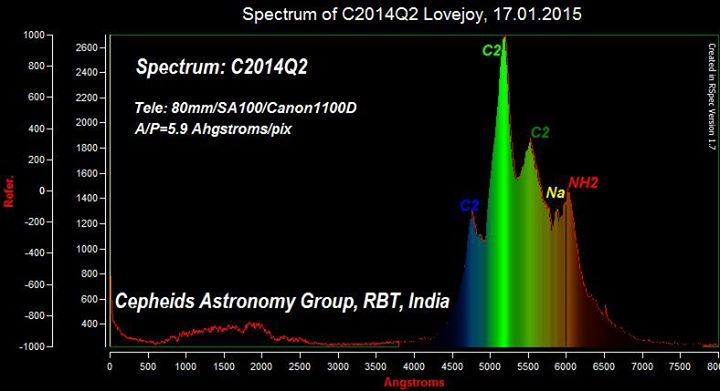 Compare this to work done by physicist W.Swan in 1856, who researched emissions from C-C dimers and published their visible spectrum.

As you can tell the images are an exact match. Emission Peaks appear at 520 nm with satellite bands on either side. This wavelength corresponds to what we perceive as “green”. Astronomers seem to have gotten their chemistry totally wrong and its surprising how long this myth has been propagating

In 2004, astronomers at Kitt Peak Observatory in Arizona, USA discovered a near earth asteroid, dubiously named 99942 Apophis. The asteroid is about 200 m across in diameter. It became famous for being an asteroid with a rating of 4 on the Torino Imapact Hazard scale. Since 2006, the asteroid had been demoted to 0. However recent studies into the asteroid’s orbit has questioned the accuracy of this rating. Scientist in Russia think that there is a very real chance this asteroid will impact earth in 2036.

This observation has been refuted by NASA. According to Donald Yeomans, director of NASA’s near earth objects office claims that the probability of impact is currently 1/250,000.

Apophis will come within 5 earth radii distance of the earth in 2029. However if the asteroid passes within a region of space called the “keyhole” during this period, the orbit might change enough to cause impact with earth.
The predicted date of impact is April 13, 2036.

However from preliminary calculations we did based on this article, a Apophis class asteroid will create a 4 Km wide impact crater on a direct hit.