The perseids meteor shower peaks on Aug 13th 2015 this year. The best part is there is no moon this time to spoil the show. But wait we live in Delhi, there is always the rains .. which might get the gold medal for this year’s spoilsport, followed by smog which might manage to get a silver. Pfooey!!. Forget what I said. Good things happen to optimistic people. Get out there and enjoy nature’s finest light show.

For the un-initiated, the Perseid meteor shower originates from the debris field of Comet 109P/Swift Tuttle, which visited us in 1992 and will do so again in 2125 when it may potentially slam into us. Nah I am not losing sleep over it. I leave the worrying to the next generation.

Its expected that you might to get see 80 meteor per hr ( ZHR ), which is pretty good. Perseids are called so because they seem to radiate from the constellation Perseus. Hence the name. The radiant ( the imaginary point where the meteors shoot out from ) of the Perseid meteor shower is at around right ascension 02h20m, declination +58°, All of the meteors will appear to be traveling directly outward from this point. The best place to look to see as many meteors as possible is not at the radiant itself, but at any dark patch of sky which is around 90° away from it, since it is at a distance of around 90° from the radiant that meteors will typically appear at their brightest.

1- Keep warm clothes and waterproofed clothing with you, it does get somewhat cold and damp at night
2- Keep company. Showers can sometimes not be too active as predicted. Its nice to have someone around to chat to till then
3- Contribute. You can time meteors and report them to IMO.
4- Observe from a safe and rural location if possible. City lights almost ruin everything. 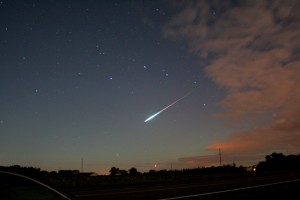 So, me and some of my astronomy enthusiast friends went out to look for Aurora borealis here up in Northern Minnesota. As luck would have it we had a hard time dealing with cloud cover and the moon rising at around 9 pm local time . However as i was playing with may camera, trying to detect any signs of an auroral glow, this nice visitor showed up in front of my camera.

The bright meteor left a nice smoky trail as it blazed by. The fireball’s flash  was so bright that it could cast shadows on the ground.