A high altitude balloon (HAB) or a near space balloon a weather balloon made out of natural latex, designed to carry out experiments in the Stratosphere. The balloon is generally filled with Helium or Hydrogen gas, both of which are lighter than air and consequently pushes the balloon up. Generally Helium is used, because it is safe to handle. Hydrogen is an explosive gas and is rarely used. We definitely DO NOT recommend using Hydrogen.

What Is the Stratosphere

The stratosphere is a layer of the atmosphere that is sandwiched in betwen the “Troposphere” below it and the “Mesosphere” above it. The Troposphere is the layer in which we live and breathe. It extends 7-50 Km above the earth’s surface and contains about 20% of the Earth’s air. The stratosphere is stratified in temperature, with warmer layers higher and cooler layers closer to the Earth. The increase of temperature with altitude, is a result of the absorption of the Sun’s ultraviolet radiation by ozone 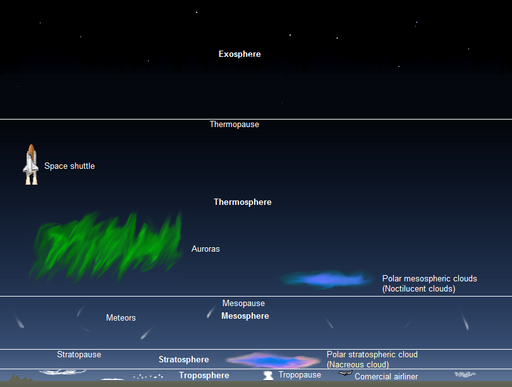 All HABs typically fly around 75000ft to 120000 ft above the ground, depending on the size of the balloon. At such altitudes temperatures can fall to -60C, which is extremely harsh for all electronic devices. The air molecules at this altitude also experiences a lot of cosmic ray hits which is also very harsh to electronics. Cosmic rays are known to cause bit-flips or malfunction in consumer grade electronics. The higher you fly, more pronounced is this effect.

As a balloon rises up, the exterior air pressure drops dramatically with altitude. On ground air pressure is about 101 KPa. At the upper limit of the stratosphere, this can drop to about 0.1 KPa. The difference in air pressure between the inside and outside of the balloon, causes it to expand; eventually the pressure difference is so large, that the fragile latex balloon will burst.