NASA’s deep solar system probe “New Horizons” made history in 2015 being the first space probe to visit Pluto, providing stunning images of the planet beloved by kids all over the world. After its mission completion on sending over the enormous volumes of data it collected, the probe’s mission was extended to do what no probe had done before. It was repurposed to now visit the Kuiper belt.

What is the Kuiper Belt?

For those of you who do not know what the Kuiper belt is, it is just a big cloud of protoplanetary material or giant space rocks that orbit the sun outside the orbit of Neptune. This bunch of space rocks are essentially the remanants of failed planets. The same stuff the solar system planets are made out of. It is thought that these rocks ( actually solidified ice, methane etc ) failed to become planets because they were too sparsely spaced to form stable planets. Pluto itself is thought to be a Kuiper Belt Object or KBO

In 2016, using the Hubble Space Telescope, a few KBOs were identified that NASA engineers and scientists thought could be suitable for New Horizons to visit and return data, given the amount of fuel left on the craft and the life of its radioisotope generators. Finally a space rock dubbed “Ultima Thule” was identified

On Jan 1 2019, New Horizons made its closest flyby to Ultima Thule making it history as its the furthest object any spacecraft has visited. New Horizons came withing 2200 Km of the KBO. Reaching this Kuiper Belt object is truly and outstanding feat of mankind.

As you can see, the asteroid has a snowman like structure. Scientists think the two parts of the ball were distinct objects before, until they collided and coalesced togther. the asteroid is approx 20 miles by 10 miles 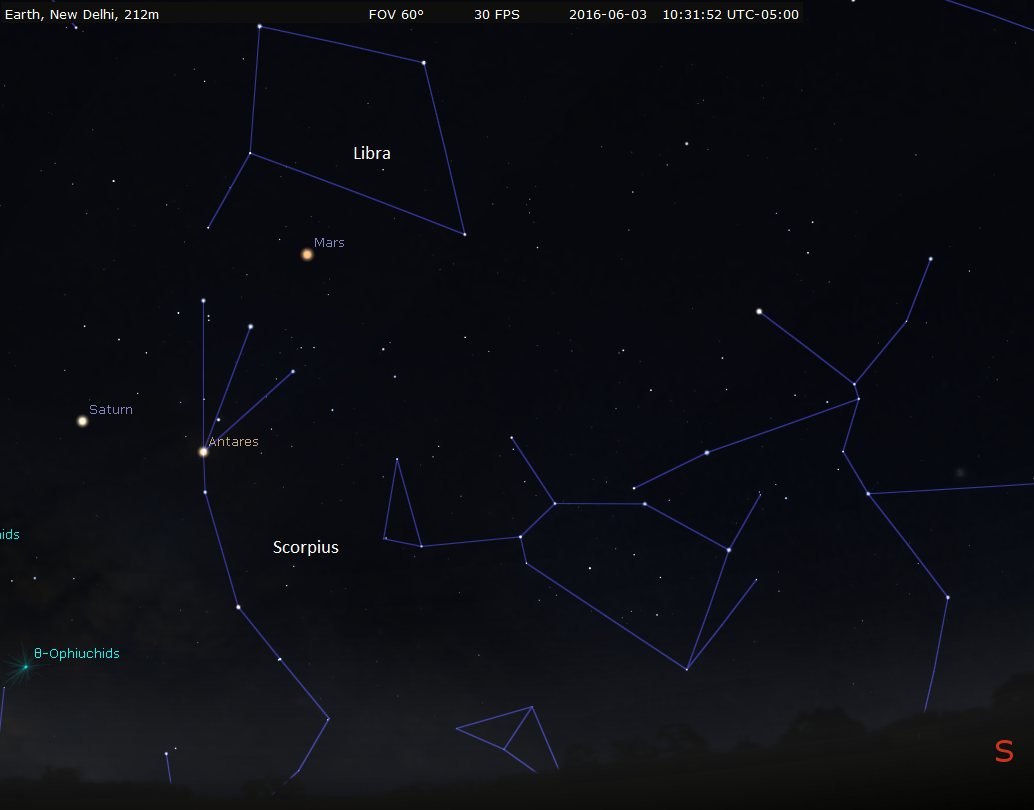 Looking South 2131 IST
Summer is here and one cannot miss Saturn and Mars in the night sky. Looking south-east, Saturn is a stunning magnitude 0 star right now, appearing towards the west limb of Scorpius ( more in Ophiuchus ). Saturn hits opposition tonight so its really bright. Also its rings are tilted 26 degrees to us earthlings, which means that small telescopes can get a really good viewing including the famous gap in the rings called the Cassini division. Mars also hit opposition a few days back so both planets should make backyard astronomers and enthusiasts extremely happy

Now don’t just sit there and read this. Grab your gear and get out and have fun under the sky.

Greetings Fellow Earthlings
Tonight step outside the house for a change and look West at sundown. You’ll be greeted with a spectacular planetary pair of Jupiter and Venus almost hugging each other in a nice visual conjunction. Kind of ironical considering Jupiter is God of War, and Venus is the God of Loveeee. This treat will continue for a few days so do not worry if you’re sitting under the clouds right now.

Sky and Telescope astronomy magazine suggested that the event closely resembles the Star of Bethlehem which, according to Christian tradition, revealed the birth of Jesus to the Biblical Magi, and later led them to Bethlehem.

Using NASA’s Kepler Space Telescope, astronomers have discovered the first Earth-size planet orbiting in the “habitable zone” of another star. The planet, named “Kepler-186f” orbits an M dwarf, or red dwarf, a class of stars that makes up 70 percent of the stars in the Milky Way galaxy. The discovery of Kepler-186f confirms the long held theory that planets the size of Earth exist in the habitable zone of stars other than our sun. This means that with similar climate profiles like earth, life similar to earth may exist elsewhere in the universe.

The “habitable zone” is defined as the range of distances from a star where liquid water might pool on the surface of an orbiting planet. While planets have previously been found in the habitable zone, the previous finds are all at least 40 percent larger in size than Earth and understanding their makeup is challenging. The Amateur Astronomers Association Delhi invites you to

Joys of Astrophotography – A Stellar Pastime

This is a short presentation which intends to convey the joy and satisfaction the author feels while pursuing astrophotography and hopes to instill some excitement of astrophotography in the audience.

Today all astronomy and the associated science is conducted with astrophography. Apart from being a scientific pursuit, the business of collecting celestial photons is also an art form. The presentation covers both aspects of astrophotography.

This movie was presented at the recently concluded 10 day festival of astronomy, Kalpaneya Yatre at Bengaluru.

Mark your calendars folks, its surya-grahana time in India again. Come July 2009 the moon will eclipse the sun as seen from India, Bhutan,Bangladesh,China, Japan and the Marshall Islands. Its going to be the longest solar eclipse for over a century and guess what, this time the path of totality passes through India. This eclipse pass over India comes after almost a decade. The last two eclipses happened in 1999 and 1995.

The eclipse begins on the 22nd of July 2009 at around 5:30 am IST in India and spends almost two hours passing the subcontinent. The path of totality will pass through central India passing over Surat, Ujjain, Baroda, Bhopal, Patna, Darjeeling, and Dibrugarh in the far east. Rest assured the Bohemians will be out there somewhere chasing the eclipse.!!!!

The use of homebrewn filters is recommended to seasoned astronomers only who understand the risks involved! There are however very simple ways to observe an eclipse without putting your eyes in harm”s way

One of the simplest method to observe the sun safely is through a pinhole projection camera. This can be used for viewing the partial phases of the eclipse. During totality however, it is perfectly safe to watch the eclipse naked eye.

To learn how to make a pinhole camera CLICK HERE

Alternatively you may use a solar filter

The first thing you must remember is that the human eye has no nerve endings, so if you burn your retina, it will not hurt. 😛 , which is all the more reason that caution is advised while observing the sun

It is never safe to look at a partial or annular eclipse, or the partial phases of a total solar eclipse, without the proper equipment and techniques. Even when 99% of the Sun”s surface (the photosphere) is obscured during the partial phases of a solar eclipse. This is primarily because nearing totality the ambient light levels become so less that our pupils dilate and the iris tries to allow in more light into the eye.

During the partial phase any surge in sunlight, like the one seen during a diamond ring formation can cause excessive solar radiation entering the eye and causing a burn on the retina.

In spite of these precautions, the total phase of an eclipse can and should be viewed without any filters whatsoever. The naked eye view of totality is not only completely safe, it is truly breathtaking